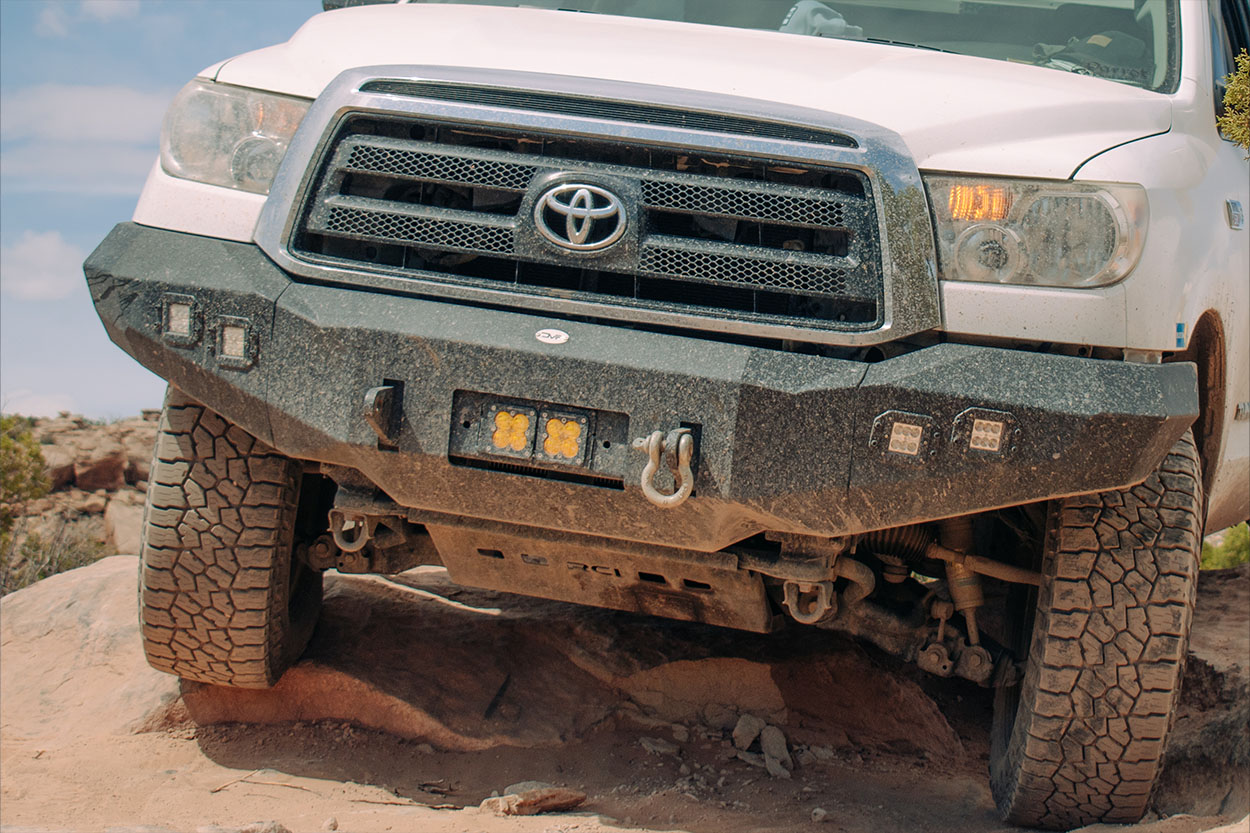 RCI Metalworks Engine Skidplate – 65,000 miles and 3 years, does it stand the test of time?

Hazards are everywhere. The moment you start your truck, you’re taking a risk. Whether a screwdriver falls out of a truck on the interstate in front of you or the line you take on the trail doesn’t go as planned, every Tundra (and vehicle!) needs underbody protection.

For most of us, this comes in the form of stock plastic or TRD aluminum skid plates. Although they are technically considered “skid plates”, the name is about the only thing they have in common with the many aftermarket steel or aluminum options.

I purchased my RCI engine skid plate over 3 years (and 65,000 miles) ago, and have been using it on my 2010 Tundra ever since. From the sand and saltwater of South Carolina to climbing insane forest roads in the Cascades of Washington, there is no terrain my skid plate has not experienced. I’ve had minimal trouble, including a relatively easy one-man installation, and great interactions with the folks at RCI. But most importantly, I’ve yet to find anything that could pierce the 10 gauge steel.

What’s The Difference: Aluminum or Steel? 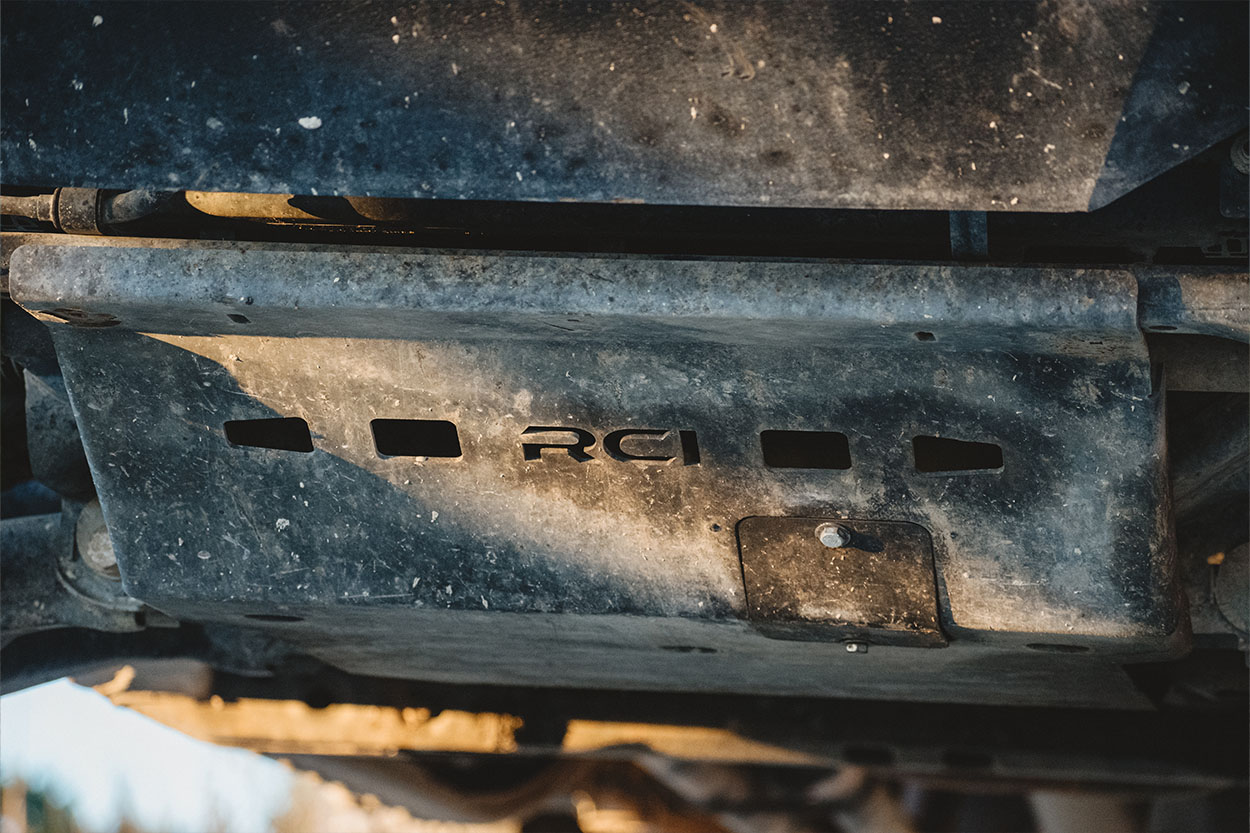 The biggest choice, besides deciding to purchase an aftermarket skid plate, is whether you want aluminum or steel. There are benefits for both options, but with the RCI skid plates, they are equal in all aspects but price.

Generally speaking, aluminum is lighter and less durable when compared to an equal thickness. RCI compensates for that by making the aluminum version of the skid plate thicker, negating the weight and durability differences. There are three options: powder-coated steel, raw aluminum, and powder-coated aluminum. They all weigh around 40lbs. So, they weigh the same and have the same durability, what are the real differences?

Aluminum is corrosion and rust-resistant, whereas steel must be painted or powder-coated. Personally, I went with powder-coated steel, and have been satisfied. In certain instances, especially during hurricane season where driving through saltwater is not uncommon, I have experienced areas of surface rust. Large rocks, potholes, tree limbs, and other things scratch the powder coating and it does require attention once or twice a year. The solution is simple, a wire brush and Rustoleum. Ultimately, is aluminum worth the increased price? If you’re in a rust-prone environment, it likely is. 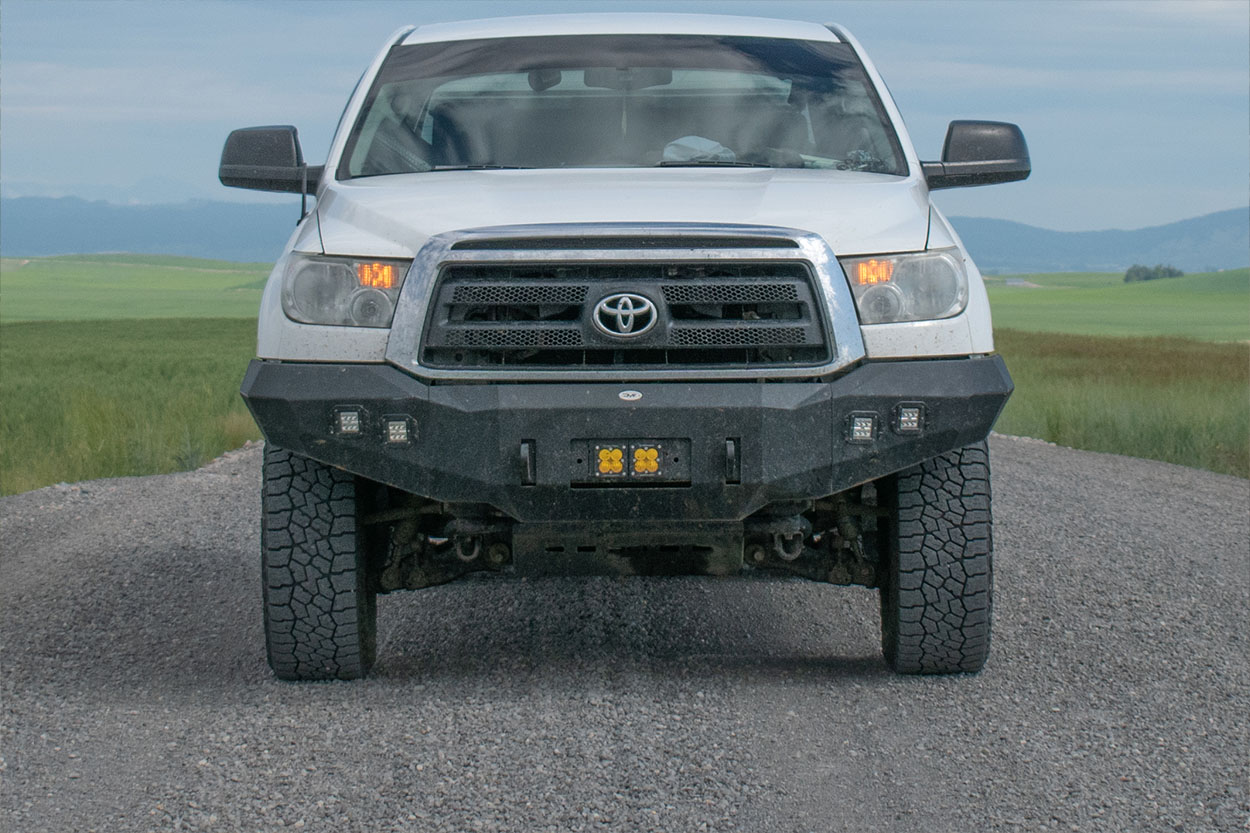 Though this article is not an installation guide (RCI has a super easy one to follow linked above), I did install the skid plate on my own, and here’s what I learned. As I mentioned before, the skid plate weighs 40lbs. That isn’t very heavy, but you definitely want two hands holding it up when trying to bolt it on while laying under your Tundra. The solution is again pretty simple. The easiest way to install the skid plate is with you and a friend, or you and a jack with a piece of wood. Once the skid plate is jacked up, you can begin hand tightening it and then lowering the jack, and finally torque everything to spec.

Behind The Door: Oil Change Ease As you would expect, RCI’s engine skid plates include a small door to drain your oil and replace your oil filter. There is plenty of room to get behind the skid plate, through the door, and move around. The door is the same material (steel or aluminum) as the skid plate and maintains the same durability. It’s held on with two bolts, and that has been the cause of some problems for me. Historically, my Tundra has been taken to shops to get oil changes done.

These shops have stripped the threads on the bolts by over-torquing or using impact guns. This can be solved by removing the door before getting your oil change done or changing the oil yourself. The door can be repaired by replacing the bolts that hold it in place. RCI has told me that they would ship me new hardware, but I end up running to Home Depot and replacing it the same day. That is probably my only complaint, though it’s more of a problem with the oil change than the skid plate itself.

Sticks And Stones: Durability of The Skid Plate 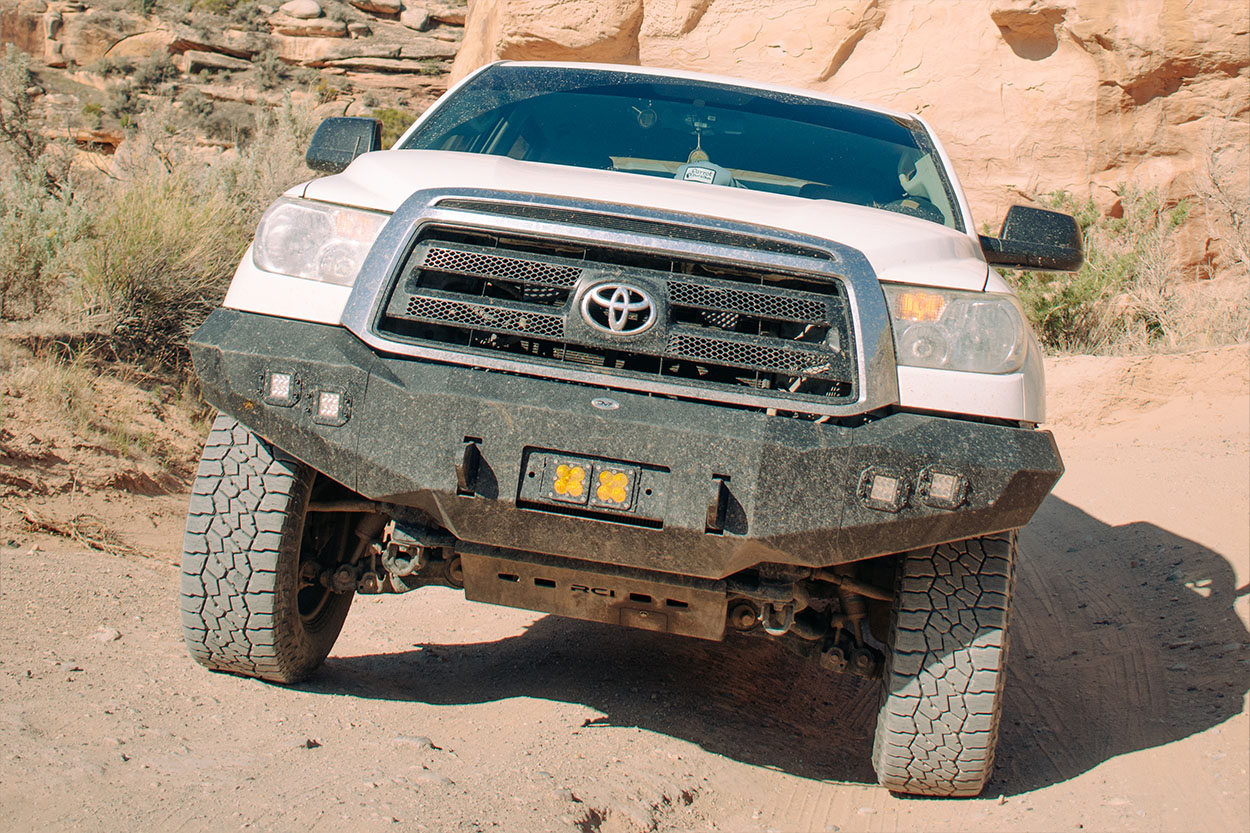 The most important quality for any skid plate is its durability. So how does the RCI skid plate hold up? Incredibly well! I’ve driven over 65,000 miles over the last 3 years, on and off-road. From rocky hillsides in Tennessee to scenic highways in Montana, to the red rocks and sand of Moab.

There is genuinely not a single type of terrain this skid plate has not come in contact with. Though this leads right into my next point. As I mentioned earlier, I do occasionally have to drive through salt water during or after tropical storms. Not only that, but being in a coastal environment, similar to being up north, salt is everywhere. Here, it’s in the air, up north, it’s on the pavement.

A skid plate’s job is to take any damage that would otherwise hit your engine or oil pan. In doing so, a skid plates powder coating — no matter how durable — is going to be chipped. When that happens, the raw steel underneath will rust. That being said, I have exposed this skid plate to some extreme rust-prone conditions, and I have only had to touch up the powder coating two or three times in the past 65,000 miles. It’s surviving far better than, say, my front bumpers powder coating. 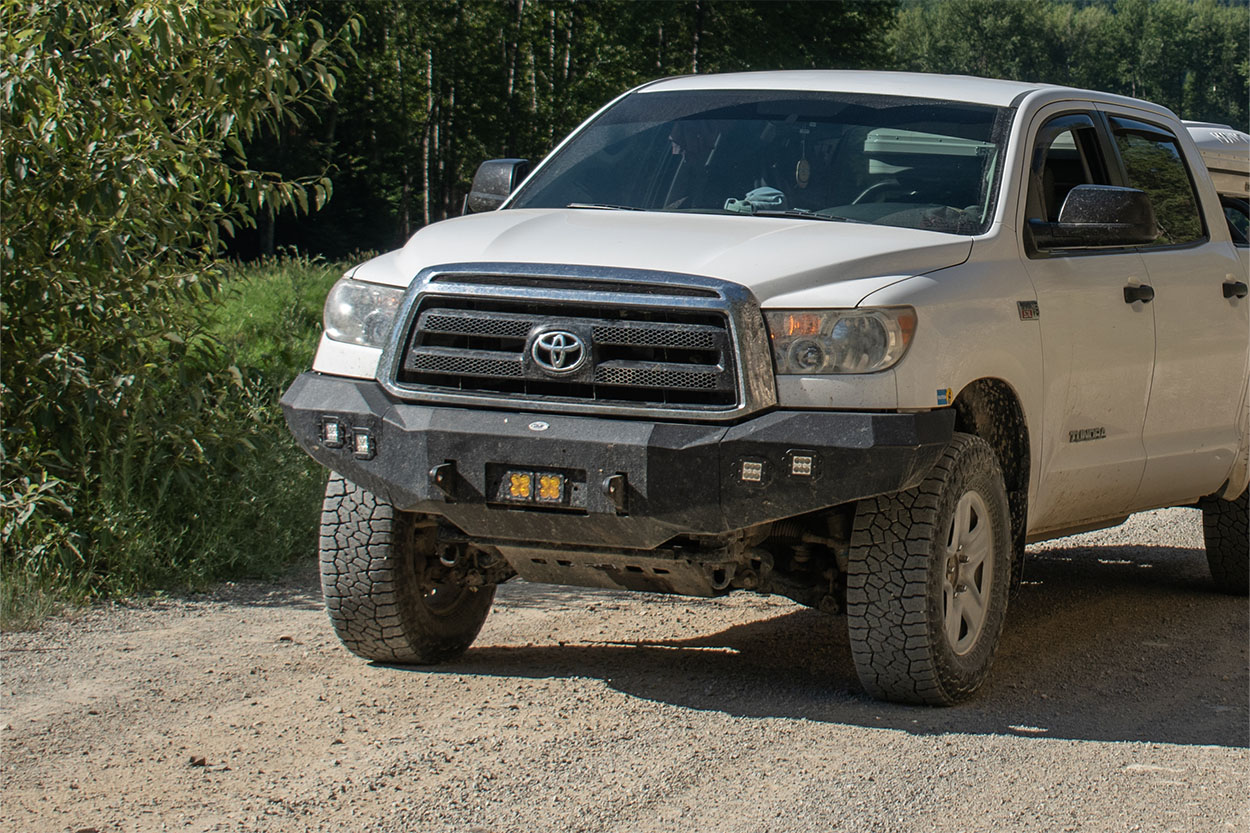 Every Tundra needs protection. There’s an infinite number of options on the market, but I chose RCI and am glad I did so. The installation was relatively simple and the powder coating is impressively durable. The plate itself has withstood impacts and general debris, both on and off-road, with no regard. I would highly recommend the RCI off-road engine skid plate for any Tundra.

You wrote: “Generally speaking, aluminum is lighter and less durable when compared to an equal thickness. RCI compensates for that by making the aluminum version of the skid plate thicker, negating the weight and durability differences. There are three options: powder-coated steel, raw aluminum, and powder-coated aluminum. They all weigh around 40lbs. So, they weigh the same and have the same durability, what are the real differences? “ This is 100% incorrect. Per the RCI website, their aluminum Engine Skidplate is 30 lbs and the Steel one is 45 (for 07-21 Tundra). It’s 50% lighter, and way less durable if you’re… Read more »