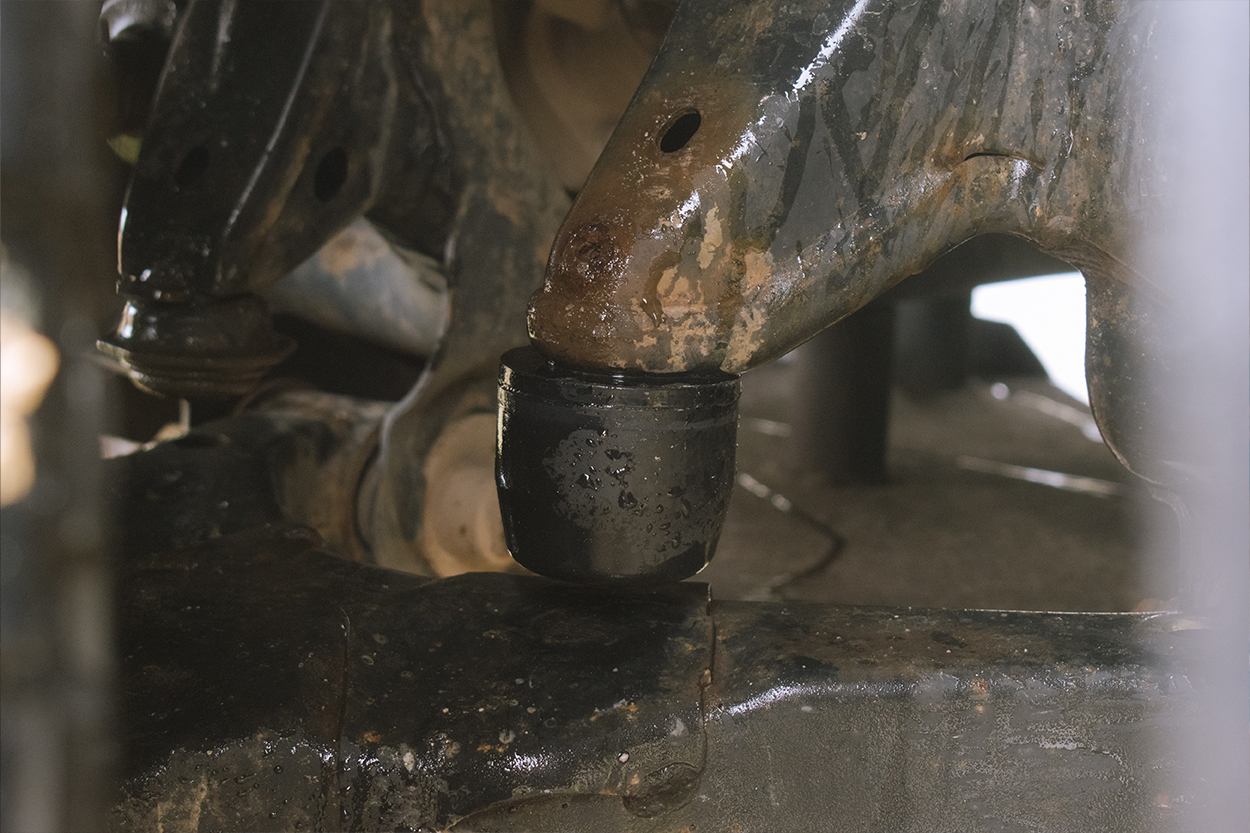 Whether it’s a pothole on the interstate that you hit at 65mph, a washboard section on a forest service road, or a serious trail that requires constant articulation, every one of us has experienced our Tundras bottoming out. Most commonly accompanied by the entire dashboard rattling, the rearview mirror readjusting itself, and you instinctively searching for the nearest chiropractor, bottoming out is a terrible experience, but it is one that can be almost entirely eliminated with a pair of Durobumps and a few minutes of your time.

Unlike factory Toyota bump stops, which are a solid piece of hard rubber that act more as a barrier between metal to metal contact than a component of your suspension, Durobumps are larger, softer bump stop replacements. They’re made out of dual durometer rubber, which means, in practical terms, that as the Durobumps are increasingly compressed, their resistance increases and they become stiffer.

This is called progressive damping, and it’s the same general concept used by high end race shocks. On your truck, this manifests itself with softer compression (and bottom outs) as the upward energy is absorbed by the Durobumps, as well as predictable rebounds that don’t compromise stability. 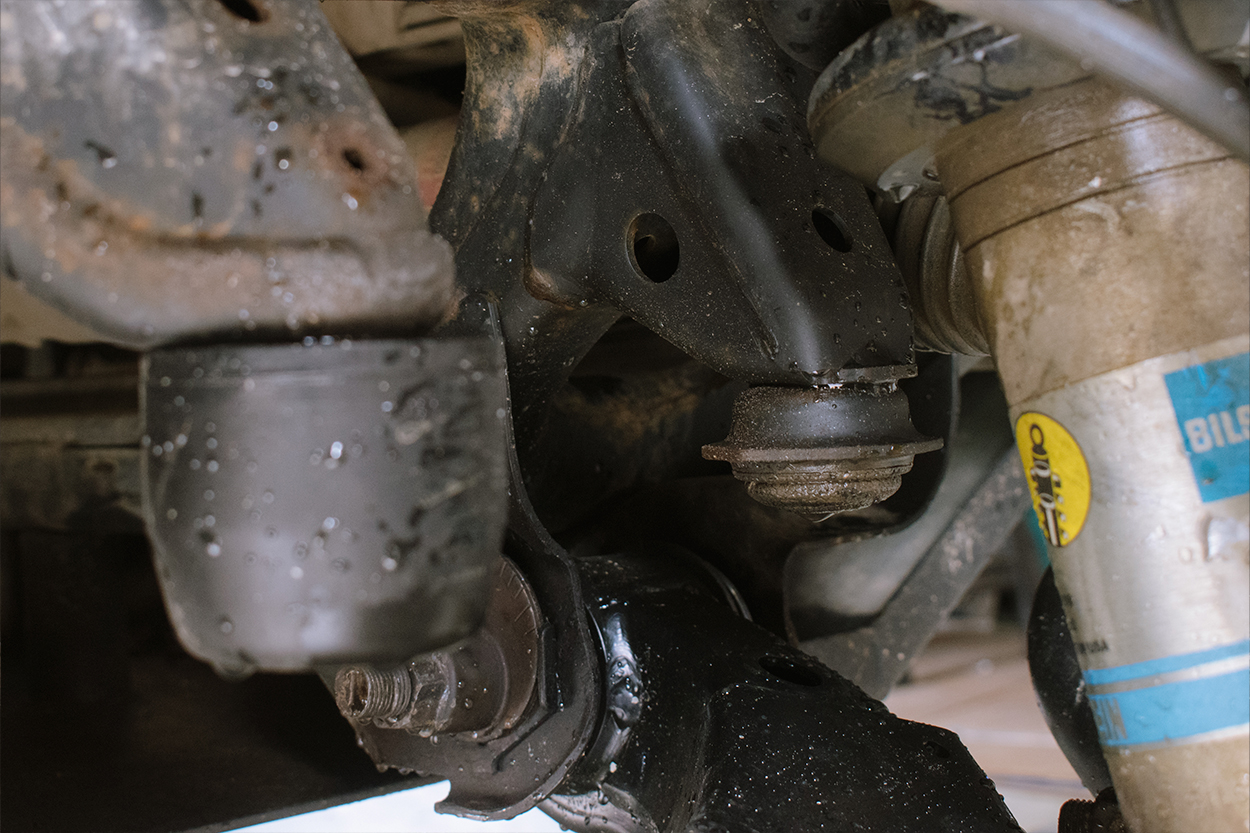 Durobumps replace the bump stop that makes contact with the rear of the lower control arm.

If you’ve ever looked behind one of your Tundra’s front wheels, you might notice two bump stops on either side — four in total. With the factory bump stops, these are designed to evenly distribute the stress from the lower control arm to the frame of the truck. Durobumps are designed to replace the bump stops that make contact on the rear of the lower control arm. Make sure you install them in the correct place! 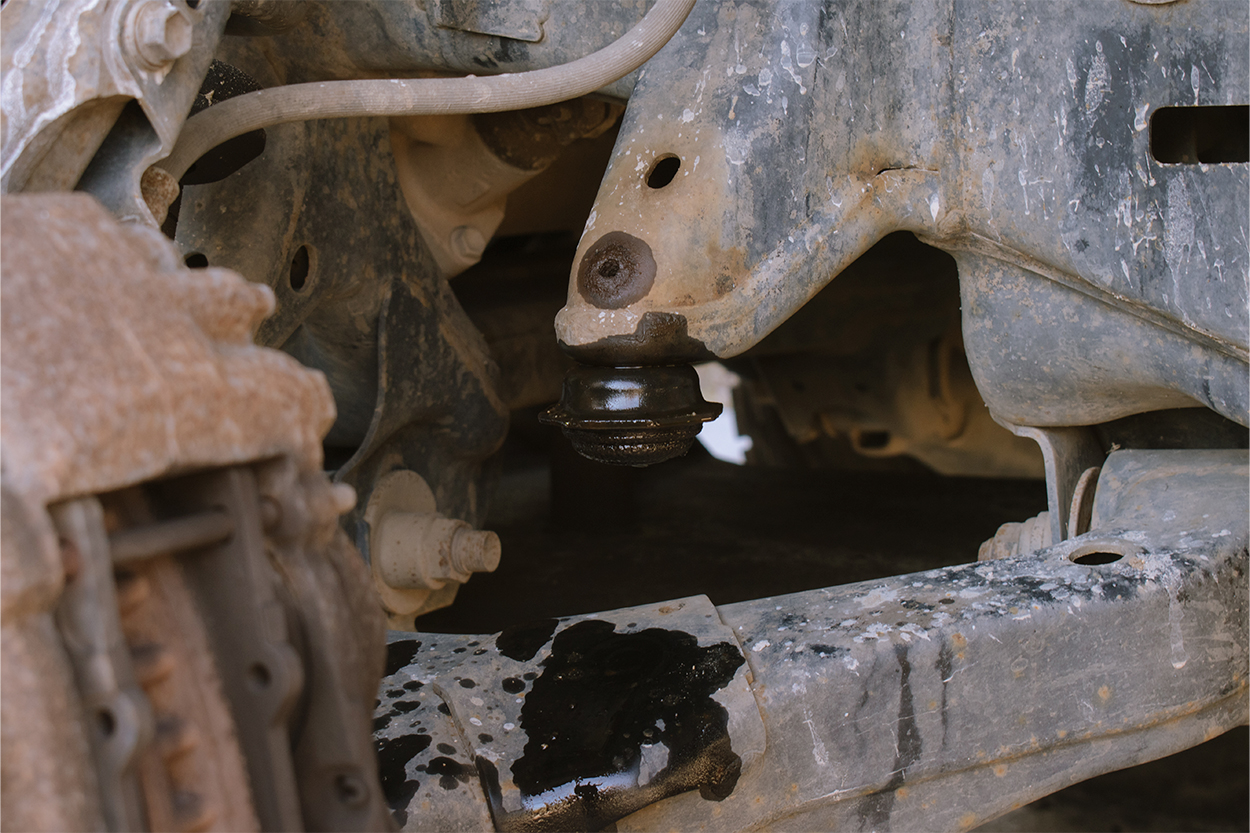 At least a day prior to installation, spray the bump stop that makes contact with the rear of the lower control arm with penetrating fluid. Apply liberally, and do not be afraid to let it soak in. 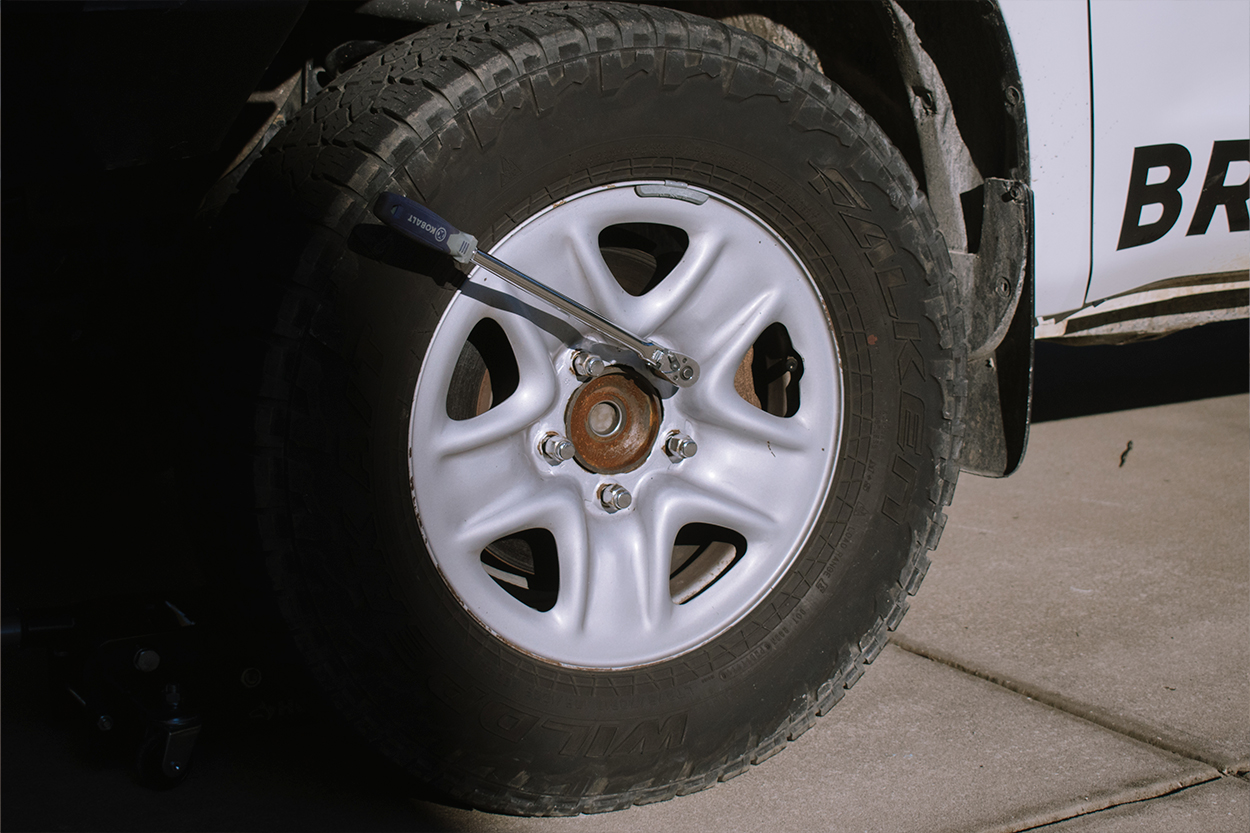 On a level surface or driveway, engage the emergency/parking brake and chock the rear tires. With all four tires still on the ground, use a torque wrench or breaker bar with a 22mm socket, in a star pattern, to break all the lug nuts loose. Do not remove them completely.

Step 3. Jack Up Your Tundra 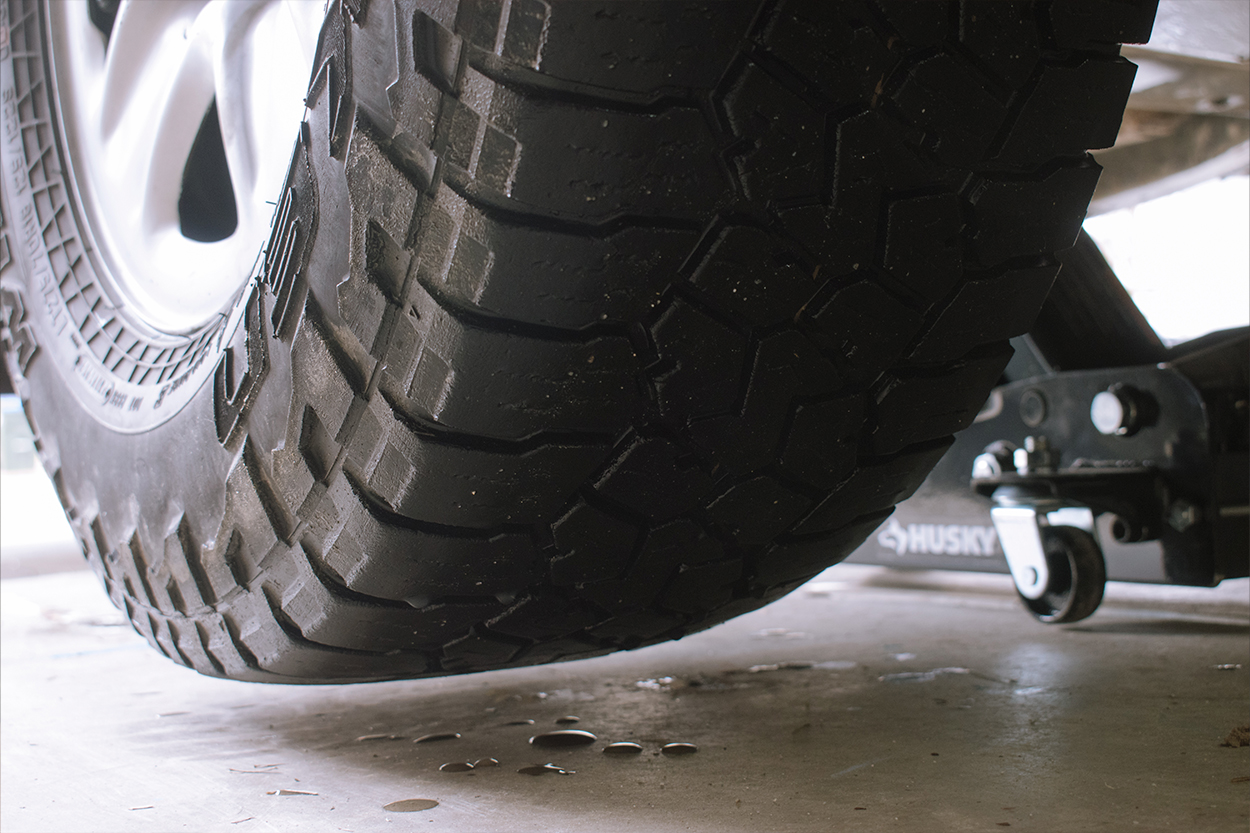 Jack your Tundra up by either the frame rail along the side of the truck, or from the front crossmember. If you are unsure of where to place your jack, refer to the owners manual for specific locations. 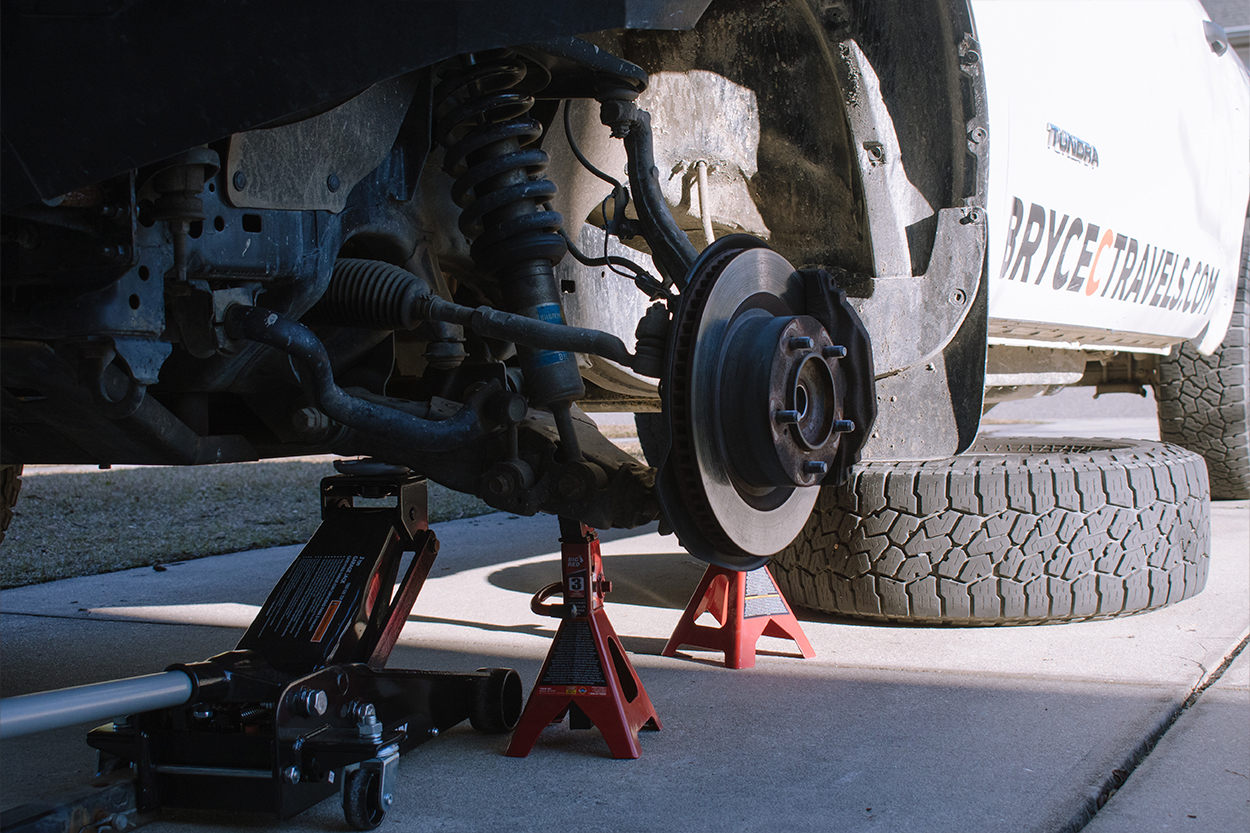 As the lug nuts should have been broken free previously, complete remove them, in a star pattern, with a 22mm socket and a socket wrench. Once removed, give the tire a light shove and you should be able to remove it completely. Place this tire underneath the frame rail as a 2nd failsafe. 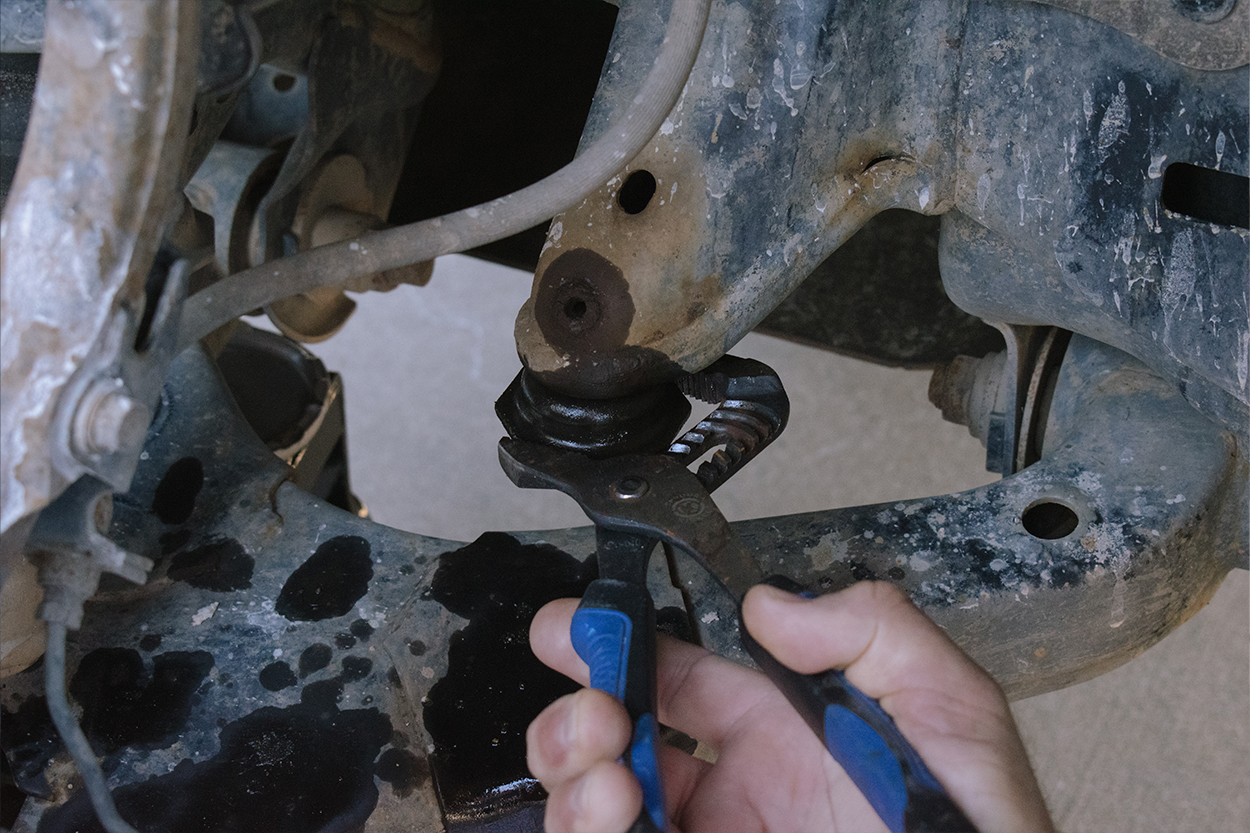 Using large channel lock pliers or similar, unscrew the OEM bump stop that makes contact with the rear of the lower control arm. Be careful not to snap the OEM bump stop bolt, which is threaded into a welded nut. Turn lightly and with even pressure. The more miles and rust your truck has, the more difficult removing the OEM bump stop will be, which is why letting penetrating fluid soak is important. 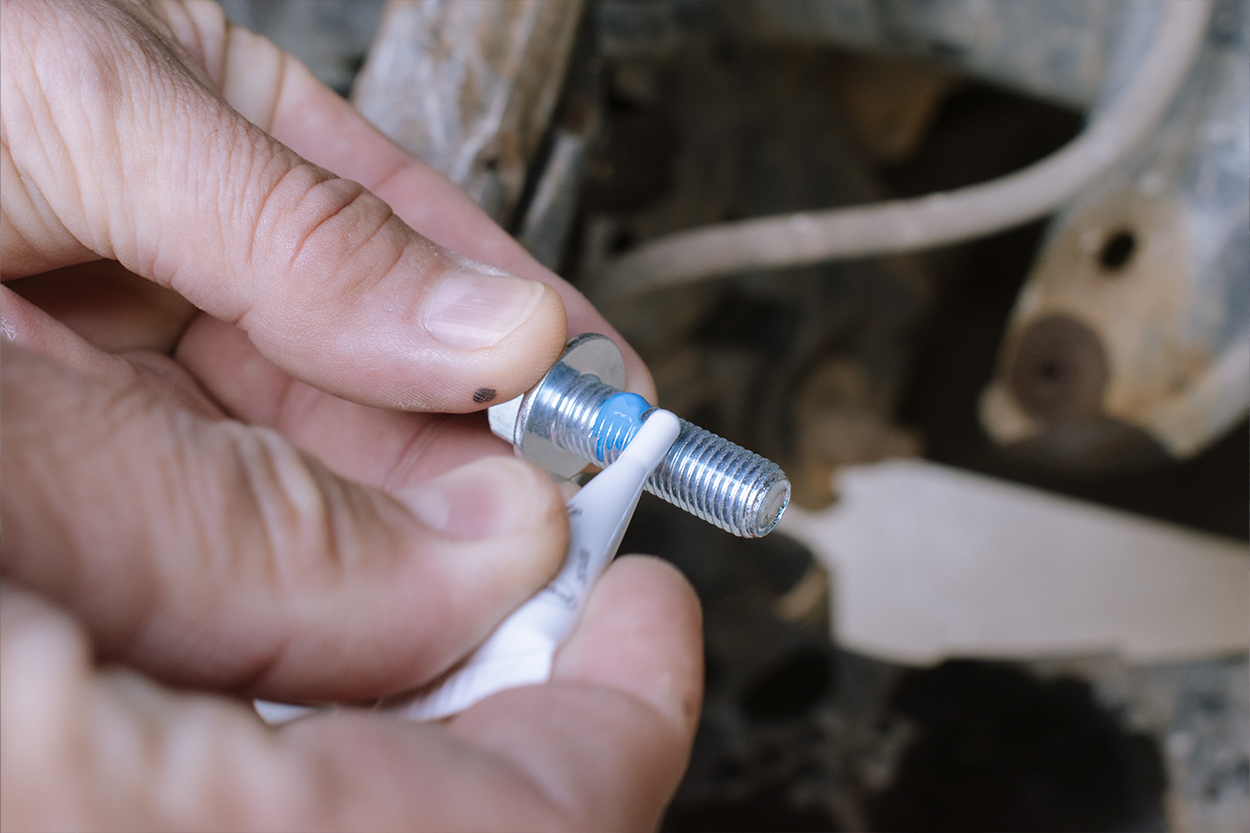 Using a wire brush or similar, remove dust and any debris from the mounting surface. Apply the included blue thread locker and insert the flange bolt into the Durobump bump stop. 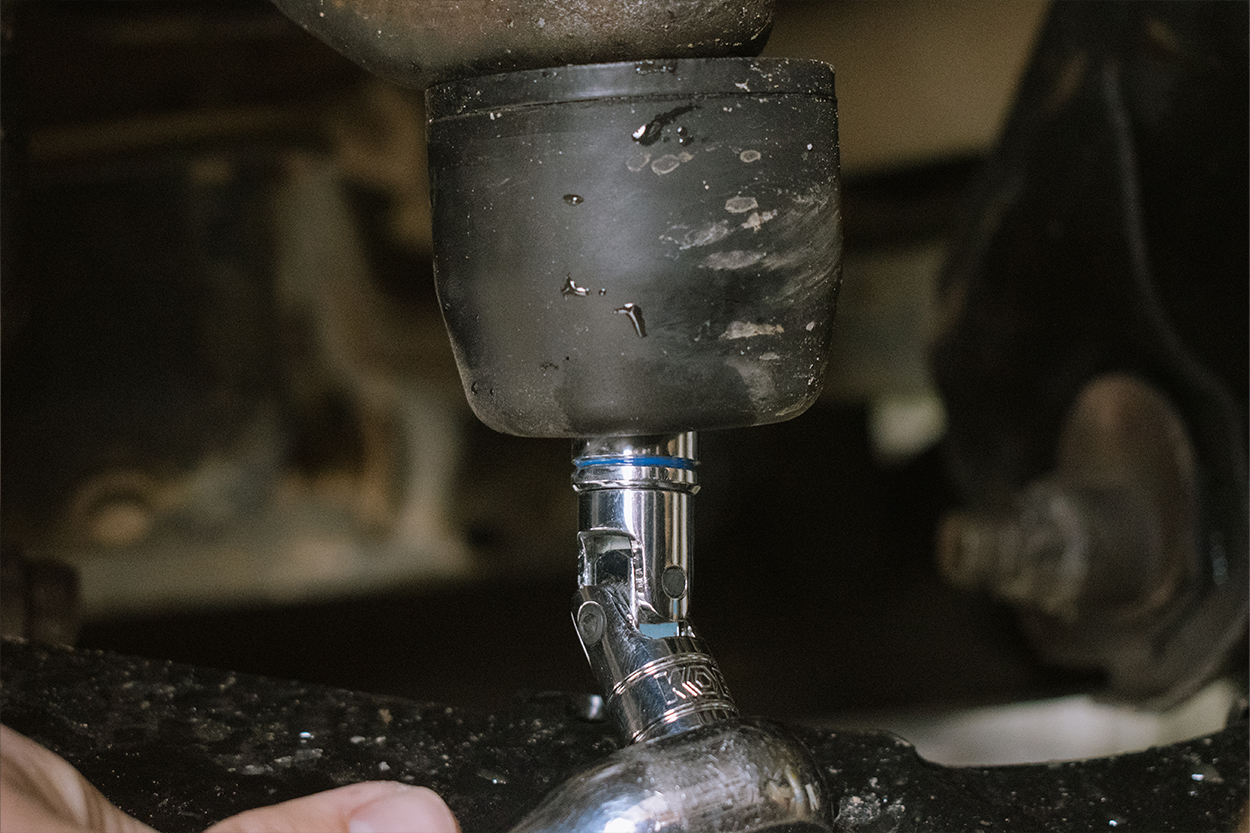 Install the Durobump and tighten by hand. With a 14mm deep socket, tighten until snug (12-15ft/lbs), but do not over tighten. Leave the OEM bump stop at the front of the lower control arm as is.

With the Durobump now installed, lift the wheel back onto the lugs and tighten the lug nuts snug with a 22mm socket. Remove the jack stand(s), and slowly lower the truck back to the ground. With a torque wrench, torque the wheels to spec. Torque specifications differ depending on your wheels, but for

The Importance of Penetrating Fluid 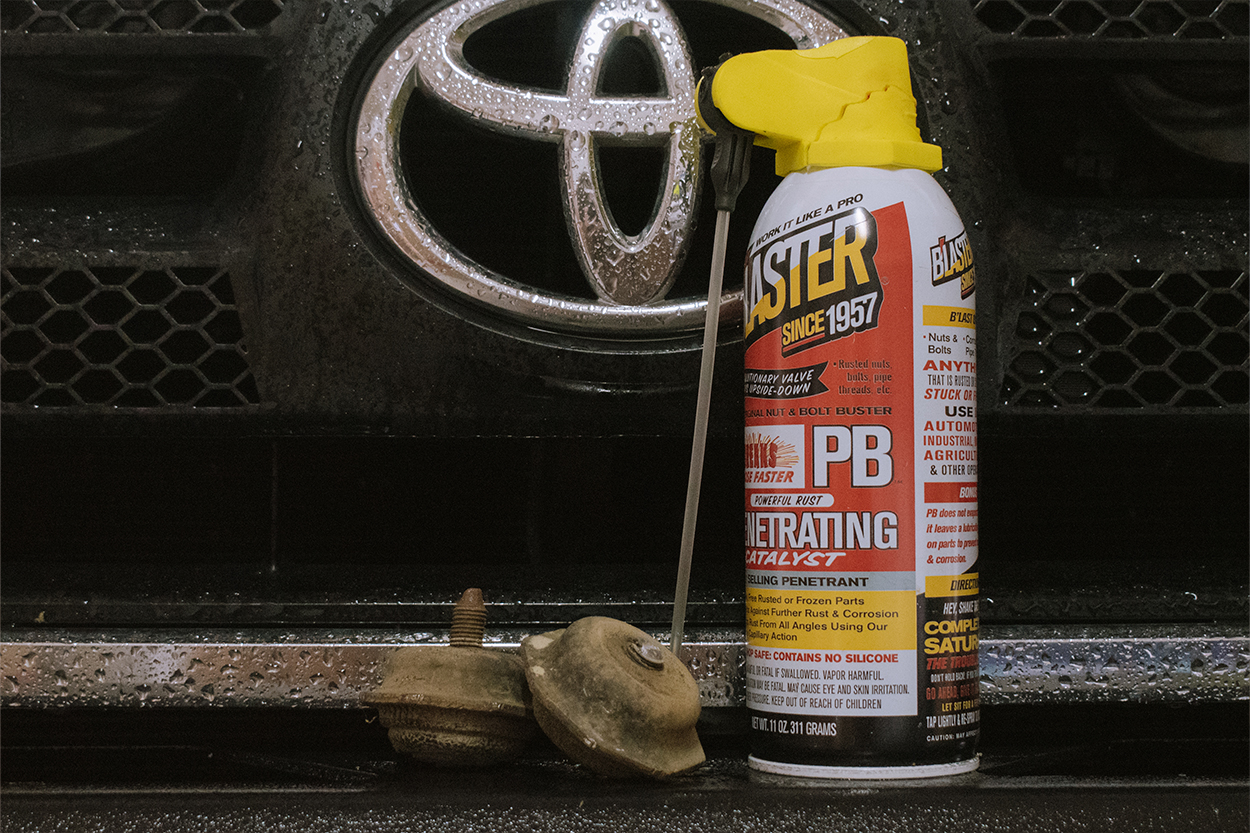 One thing worth noting is that it is possible for the factory bump stop studs to shear upon removal. In my case, with over 185,000 miles and slight surface rust, that was the case on my second installation.

The biggest contributing factor was that I did not allow the penetrating fluid to soak in for 30 minutes, let alone a day or two as I’ve advised above (do as I say, not as I did). If one of the bolts does shear upon removal, it’s not a huge deal. 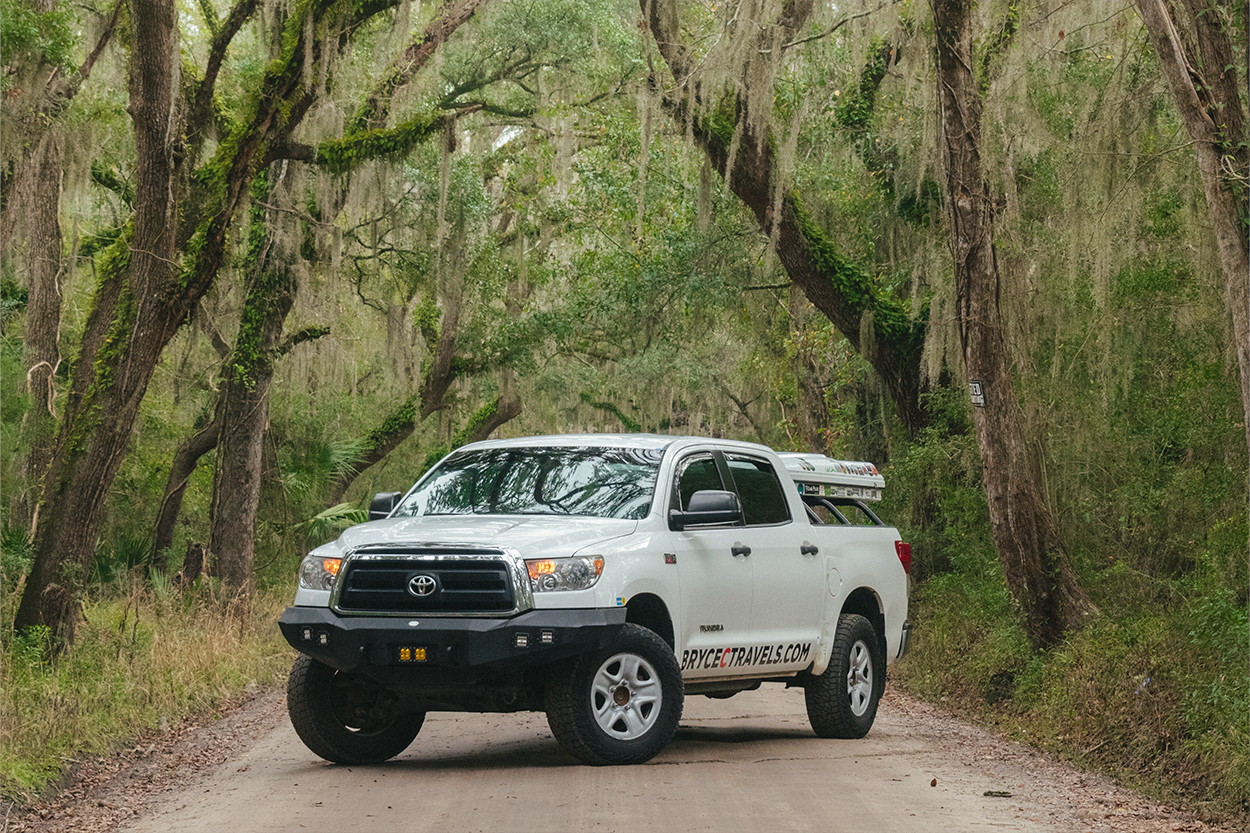 Though Durobumps are most often noted for their off road performance, and for good reason, it is worth mentioning how they perform on road. Because they are bump stop replacements, Durobumps are not something you will notice every time you get in your truck. It does not have an active role, like your Tundra’s shocks, struts, leaf springs, or tires. They are purely passive, which is perhaps why when they are called upon, their performance is even more impressive. You forget they’re even installed on your truck until you hit that one pothole, that one train track, or that one insanely impractical speed bump that every neighborhood seems to have.

If we’re being truthful though, restricting Durobumps to potholes and train tracks almost seems cruel. They’re designed to endure far worse and still provide relief. So, over the past few weeks, I’ve routinely taken my Tundra through large off-camber ruts, whoops, jumps, and deep, loose sand that turns to washboard trash.

I’ve put the Durobumps through their paces, and in places where my Bilstein 6112s can’t keep up, Durobumps are there to pick up the slack. They noticeably (and audibly) soften landings, provide increased stability on every rebound, and eliminate most of the jarring motion that comes with jumping a 6,300lb truck, 250lb steel bumper included!

Given that most Tundra owners will likely never want to experience those events, the easiest way to imagine how much of an impact Durobumps make off road is by taking 25psi out of your tires and seeing how soft harsh hits become. They make that much of a difference!

Not once so far has my rearview mirror bounced loose, nor have any pieces of my dashboard fallen apart as if I was inside a Saturn V rocket. Make no mistake, I still know if I hit a washed out section or a large hole. But the recurring theme seems to be a lack of care. Slowing down and dodging holes has become speeding up to see if I can make them feel as it did with factory bump stops. The answer is no, nearly every time.