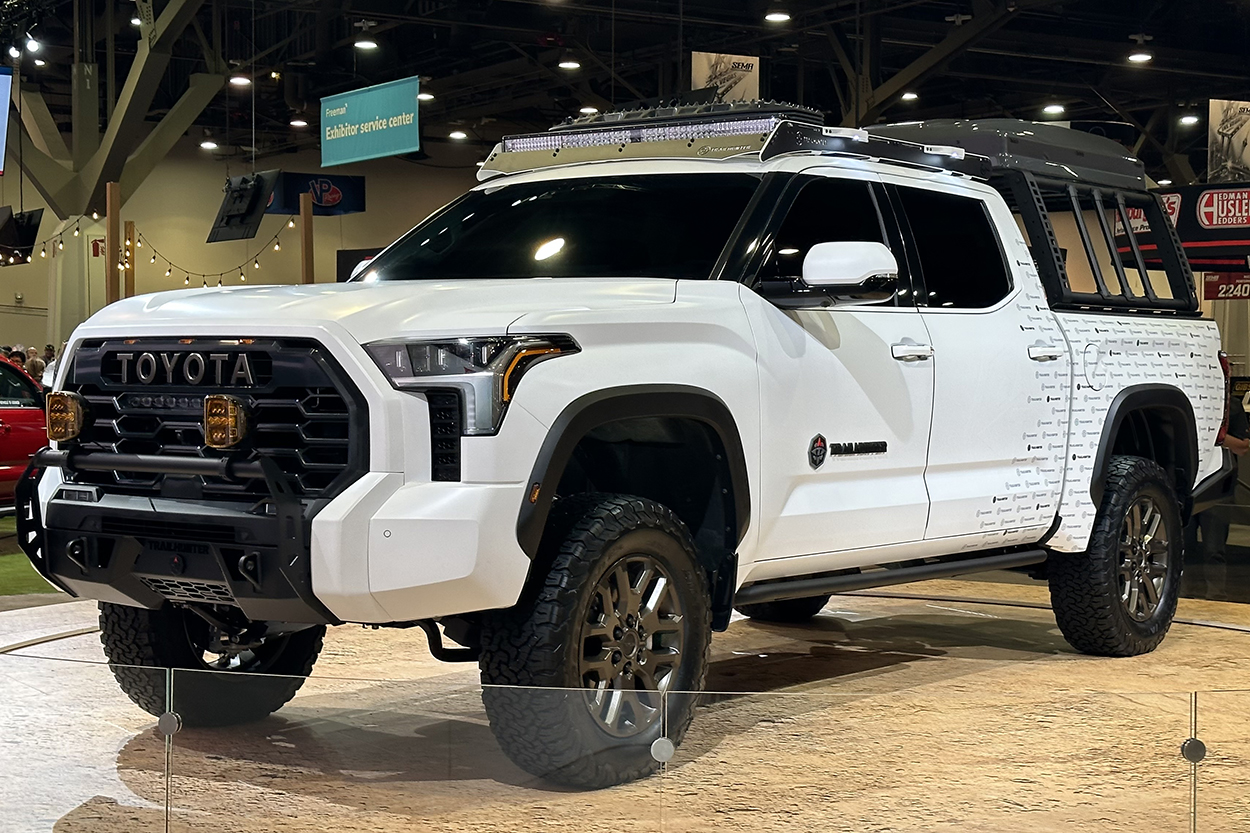 Toyota officially revealed the Trailhunter. This will be a body-on-frame overland-ready rig direct from Toyota to the consumer.

I was lucky enough to be at SEMA 2022 this year to witness Toyota’s unveiling of its new Toyota Tundra Trailhunter concept. We Toyota enthusiasts have been curious ever since Toyota trademarked the term Trailhunter, and just what the heck it was going to be.

Well, it has officially been revealed and I have some first-hand information for you all!

Spoiler alert: This is not a new Land Cruiser or a Ford Raptor/Ram TRX competitor. However, it still has me very excited for the future of Toyota off-road vehicles.

The Toyota Tundra Trailhunter concept vehicle helps represent Toyota’s vision of what a truck could look like straight off the showroom floor. This includes available associated accessory products that Toyota has to offer.

The concept truck I saw on display at the 2022 SEMA Show was equipped with:

That isn’t the whole list, either. For anyone unfamiliar with these products, they have all been engineered specifically for overlanding applications.

Toyota said that – “Enthusiasts can expect future Trailhunter products to deliver terrain versatility and protection as well as load-bearing performance and storage functionality for their equipment, recovery gear, and base camp necessities.”

All that is fine and dandy, but what does it really mean?

What Is The Toyota Trailhunter? 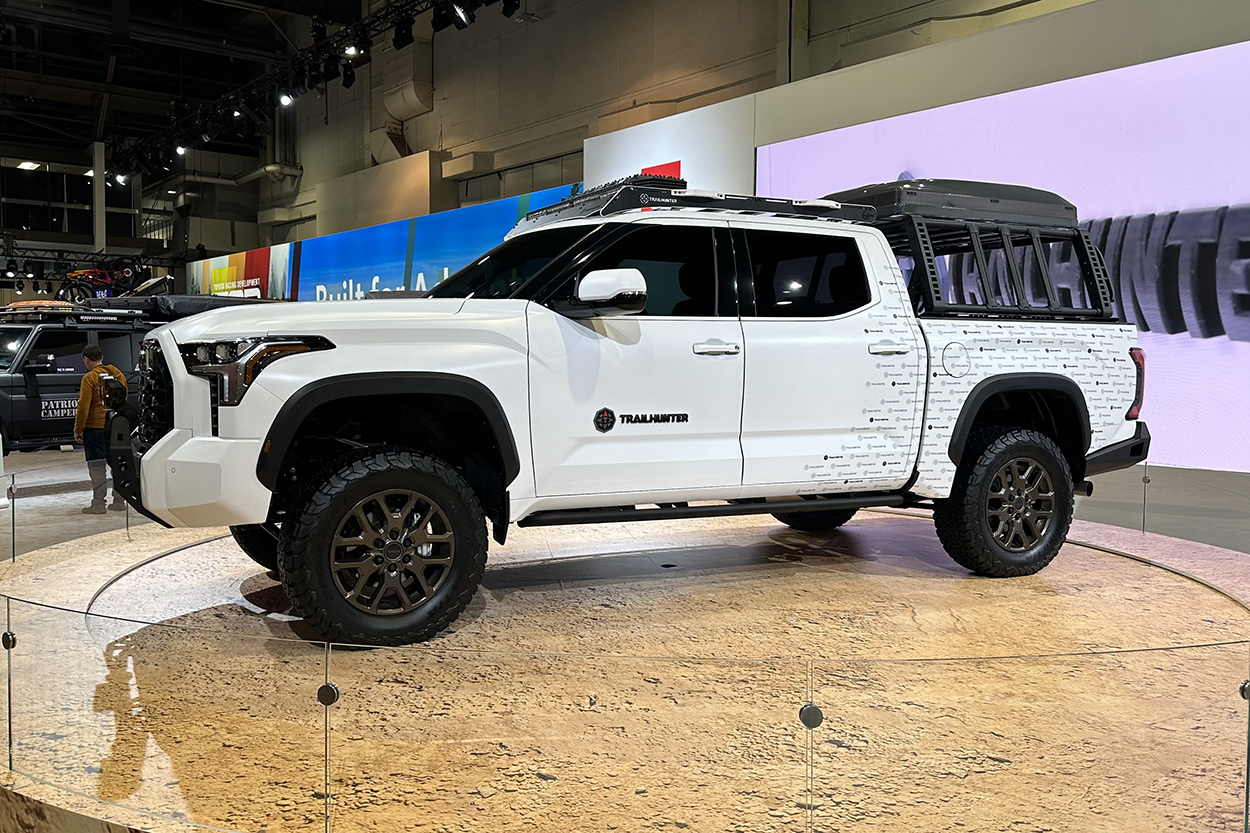 “Trailhunter trucks will come straight from the factory equipped to meet the needs of Overlanding enthusiasts,” said Lisa Materazzo, Group Vice President – of Toyota Division Marketing. “These trucks will be developed in-house by our engineering teams and will be the most capable OEM Overlanding solutions designed to meet Toyota’s legendary quality, durability, and reliability standards.”

The Trailhunter name just isn’t a simple badge with some extra parts thrown at it. At least, that’s what Toyota said their intentions would be. Each Trailhunter will be built from the ground up with the thought that some serious weight will be added to these rigs. That means it will need appropriate suspension, tires, and wheels to handle all of the extras.

Trailhunter vehicles will be adventure-ready straight from the factory. They will be trail-ready trucks with components and accessories that support a remote off-the-grid experience.

Who Is This Truck’s Target Audience? 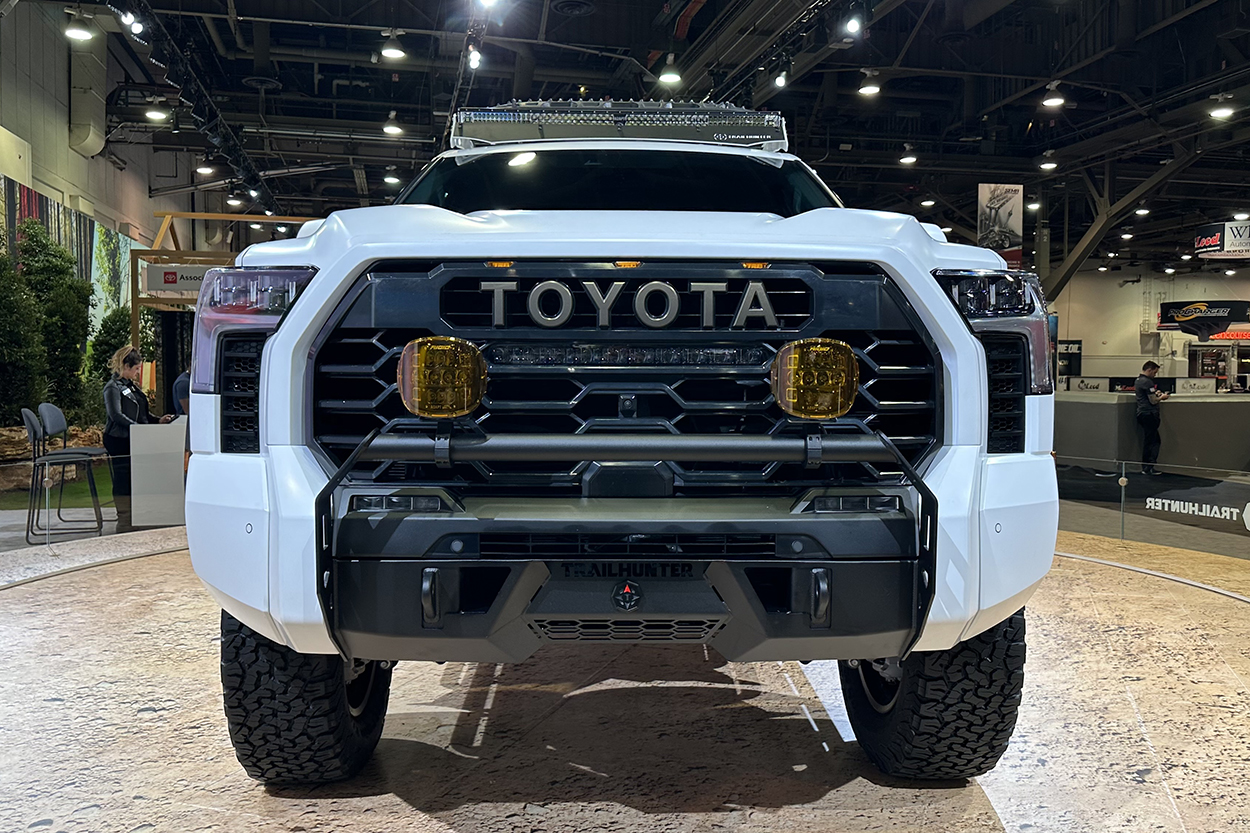 Toyota hopes that the all-new Trailhunter product line will meet the demands of outdoor enthusiasts who love to explore with their vehicles. While that is a very cool thought, I think Toyota overlooked that half the fun of off-roading and adventuring is building your rig from stock.

Where this truck shines though, is the included factory warranty. That’s inclusive of all parts that Toyota will add to the final product of the Trailhunter.

The main issue we enthusiasts have with modifying our vehicles is the potential sacrifice of our warranty through Toyota. That of course depends on what OEM components are replaced for aftermarket ones.

This truck, however, targets those with a little bit more cash on hand and a little bit less time to sit in the garage and modify their truck. The target audience of this truck is anyone who wants a 100% ready-to-go overland rig with a full bumper-to-bumper warranty.

Will Other Vehicles Wear The Trailhunter Badge? 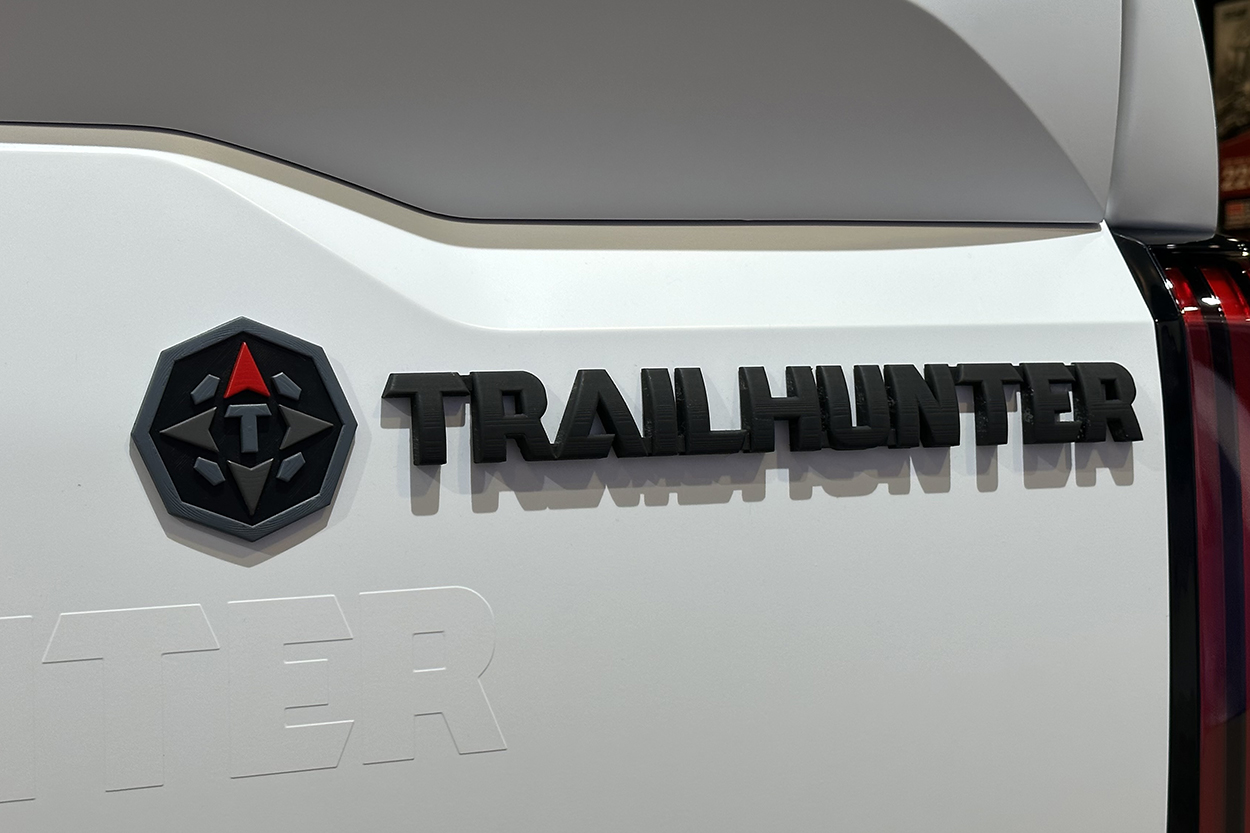 I was able to get some info out of the Toyota executives about this topic while at SEMA. The Trailhunter badge will most likely be on all of Toyota’s body-on-frame off-roaders; potentially even the RAV4.

That includes the 4Runner, Tacoma, Sequoia, Tundra, and maybe a new vehicle coming in the future. They will all eventually be offered with the Trailhunter badge. Obviously, this truck was just a concept at SEMA. However, Toyota is all in on the increasingly growing overland movement.

To have the Trailhunter option on an SUV rather than a truck would be awesome. I’m sure a lot of people would be happy to have the option one way or the other. I see the Trailhunter trim level being a huge success if they make the production vehicle to be anything like I saw with this concept. 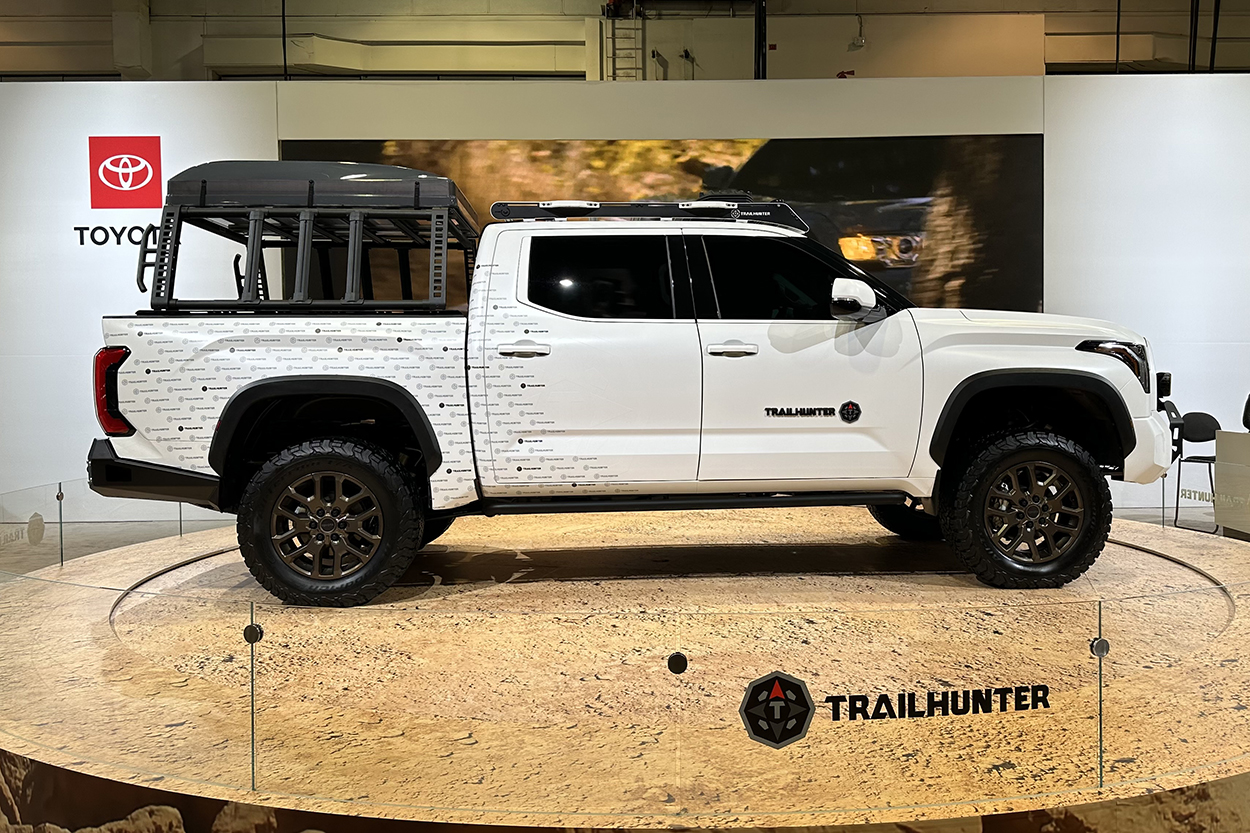 Toyota said that they will share additional Trailhunter details next year.

They state that – “Every truck will be designed from the ground up to include the overlanding modifications and components enthusiasts expect. The Trailhunter badge – which resembles a compass to reinforce that the journey is the main purpose – will represent the vehicle’s bona fide credentials as a highly functional and purpose-built Overlanding rig.”

I really hope that Toyota hears us in the comments on Instagram about the Trailhunter and truly brings this concept to reality.

I. Want. To. See. This. Truck! This is one concept that I want to see at dealerships come 2023. I want to see a factory Tundra with a front bumper, recovery hooks, beefed-up suspension, integrated interior aux ports, lighting panels, an actual roof rack, and more.

We all know that Toyota is a very reserved company when it comes to production vehicles. That’s why there is no Ford Raptor or Ram TRX killer, yet. However, I do feel that this is a new direction that Toyota plans on pursuing, and I am all for it.

I love Toyota news, reviews, and how-tos! There are big things on the horizon for Toyota and I can't wait to share them with you all!